Known as "hikyo eki" in Japan, this genre of train stations can be best described as "secluded" or "out of the ordinary." These stations are typically picturesque, remote, and unattended: a kind of lonely beauty that lends itself occasionally to films and television programs as a shooting location. If you're looking for an adventure off the beaten path in Japan, a journey to one of these locations might be right up your alley. 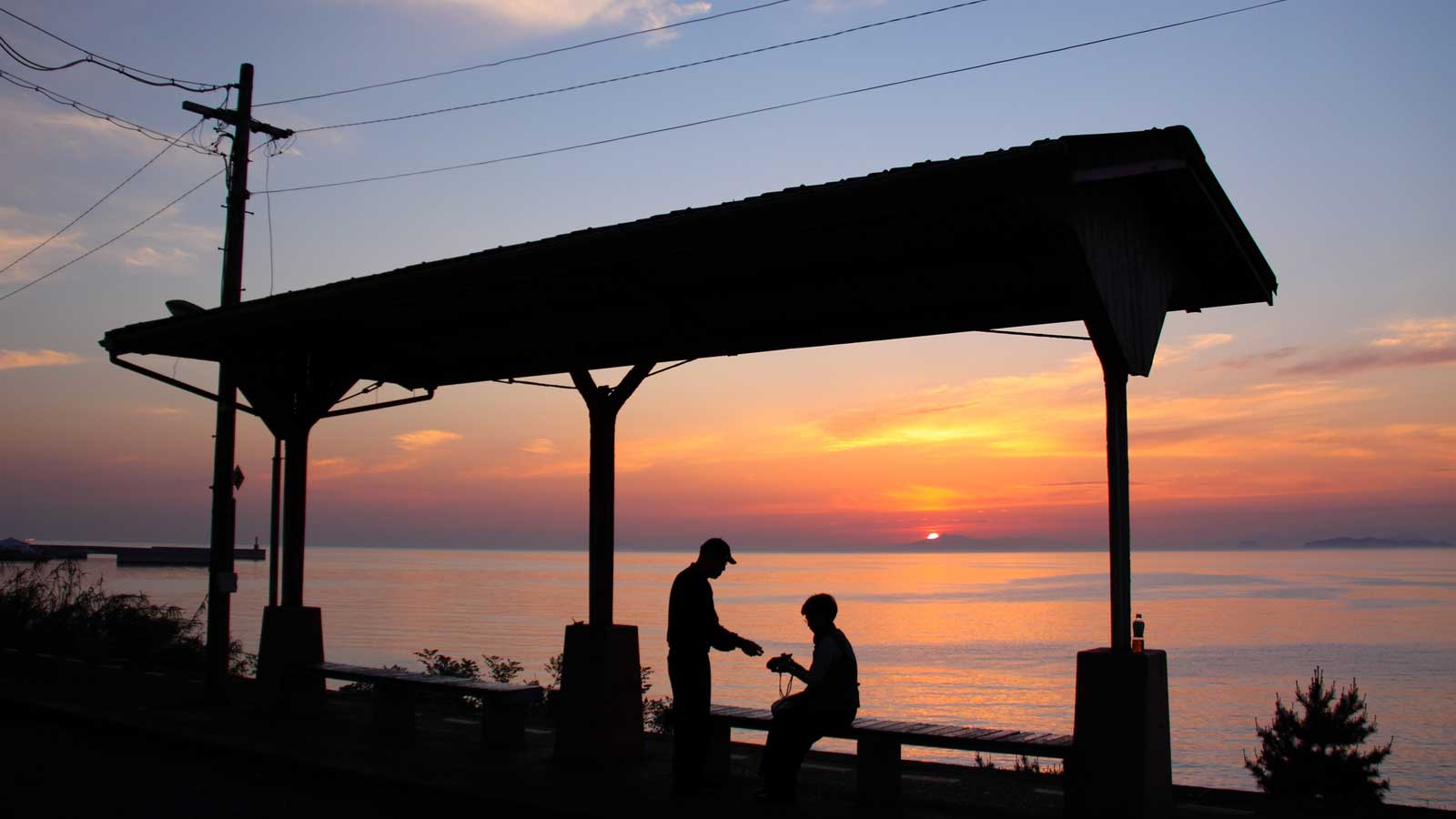 The platform of this train station boasts a gorgeous view of the Seto Inland Sea. The station has not only been featured numerous times in posters advertising the discounted Youth 18 ticket (“Seishun 18 Kippu”); it has also served as a shooting location for movies and TV dramas, attracting a large number of tourists from around Japan and abroad.

Places to stay near Shimonada Station

This station has drawn attention due to its prized location facing the Sea of Japan and the unusual kanji characters of its name (named after a nearby settlement, where according to legend the sound of the waves and the tide was loud enough to startle horses, the literal meaning is "many horses tree"). The secluded feel with few buildings nearby seems to be a good match for the atmosphere of the unmanned station. Big waves at times drench the station when a storm passes by. A sundial and a sunset calendar add further character to the platform where they can be found.

Places to stay near Todoroki Station

This is the northernmost train station in Japan with a wooden station building—it is also the northernmost unmanned station. Having withstood harsh blizzard conditions and undergone numerous repairs, the station is still in service since it opened about 90 years ago. It has also been a movie/drama filming location.

Places to stay near Bakkai Station

JR’s southernmost station with a yellow mailbox that brings happiness

This is the southernmost train station in Japan that is operated by JR. From the station’s platform, you get a great view of the Mt. Kaimondake, which is also known as the “Mt. Fuji of Satsuma” and is one of Japan’s 100 Famous Mountains. There is a yellow mailbox in front of the station, symbolizing the color of rapeseed blossoms which are characteristic of the Ibusuki area. The yellow mailbox is affectionately referred to as the “mailbox that brings happiness,” as, according to local legend, sending postcards and letters to your loved ones from this mailbox will bring them joy.

Places to stay near Nishi-Oyama Station

An unmanned station in the vast, peaceful countryside

This facility opened initially as a temporary train station but was later upgraded to an official one. Still, it is a simple station with just one platform and a single track, located in the middle of a vast rural landscape. While there used to be a yellow unused bus that had been placed next to the station as a waiting room, the bus was later removed, enhancing the station’s simplicity and secluded feel.

Places to stay near Ikuno Station

A romantic getaway destination, floating atop a lake

This extraordinary train station is located above an artificial lake and is supported by two giant iron rails that stretch from one side of the lake to the other. Near the station is a cottage where visitors can relax, but you can also walk along the iron bridge to get to the lakeside. From there, you can venture out further and enjoy a hike in the surrounding area. The train station’s platform has a bell that brings fortune in love to those who ring it, making the station a top destination for couples.

Places to stay near Okuoikojo Station

The first railroad station in Miyazaki Prefecture showing the way to “true happiness”?

This is the first train station that was built in Miyazaki prefecture, and the same wooden station building that was built when the station opened about 100 years ago remains to this day, giving the station a traditional atmosphere. The station’s name means “true happiness,” so many visitors have purchased tickets just to get into the station. A “bell of happiness” is found in the middle of the platform, and visitors are encouraged to ring the bell “as many times as they feel they are happy.”

Places to stay near Masaki Station

A wonderful train station on a bridge, offering fascinating views of open-air trolleys running along a beautiful gorge

Much of this extraordinary train station actually forms part of a bridge that stretches across the Hozu River, so a look down from the narrow platform provides a stunning view of the valley through which the river flows. Other features seen from the station are pleasure boats sailing down the Hozu River and the iconic open-air trolleys operated by the Sagano Scenic Railway Company that run along the river.

Places to stay near Hozukyo Station

While this station's name, pronounced “kot-toy,” is easy enough to say, it's one of the most difficult in the nation for Japanese people to read from the kanji characters alone. Many visitors pass through this station when they go to scenic Tsunoshima Island, using the bridge that extends out to the sea and offers a spectacular view. Kottoi Station has appeared in a well-known domestic film as “Igamihata Station.” The signboard bearing the name used in the movie is still kept for visitors today to see.

Places to stay near Kottoi Station

Selected as one of the Kinki region’s “Most Popular 100 Train Stations,” this station offers a great view of the Sea of Japan from the platform bench. Near the station is the roughly 100-year-old Amarube Iron Bridge. There is now an observation deck that was built in 2010 when the bridge was renovated, using some of the old piers that were replaced.

Places to stay near Amarube Station

A quiet but attractive train station with a view of Mt. Komagatake—a.k.a. “Hokkaido’s Mt. Fuji”

Nestled in a quiet forest, this station’s greatest draw is its location, offering a magnificent view of Hokkaido’s Mt. Komagatake. Because it was initially a rail operations center, the station has only a simple but unique design for passengers, including a wooden platform made using railroad ties. In the past, trains climbed steep slopes on zig-zag railroad tracks to service the station.

Places to stay near Higashiyama Station

Located near a mountain ridge near the border between Tokushima prefecture and Kagawa prefecture, this station is surrounded only by mountains and creeks. With no paved roads or public square in front of it, this station possesses a secretly magical feel, seemingly inviting the visitor deeper into the mountains. A notice on the bulletin board inside the wooden station building says that there is currently only one person using the station regularly.

Places to stay near Tsubojiri Station

A switchback station that evokes the steam locomotive era

Located in a mountainous area surrounded by steep slopes, this station is famous as the only station in Japan to be equipped with both a zig-zag railroad track and a loop track. Inside the station are a stone water tower that used to supply steam locomotives with water and a water spring that was used by passengers and train staff to rinse off the soot that got on their hands and faces.

Places to stay near Okoba Station

Tucked away deep in the mountains, this is an unmanned station with very few commuters. Although the station used to have its own station building, all that remains now is a metal structure that formed part of the ticket gates. The area is renowned for its clean water, as can be seen in the pond on the platform that is home to newts and a well with a sign saying, “Providing the Most Delicious Water Along the Nippo Line.”

Places to stay near Sotaro Station

Places to stay near Shingai Station

Flanked on one side by a towering mountain slope and on the other by a cliff overlooking the Tenryu River, this station is nothing less than exciting. Visitors must get through steep steps, steep slopes, and a suspension bridge to arrive at the nearby village. The train station's platform resembles a narrow alleyway, with big boulders jutting out at around head height. A trip to this station certainly offers a thrilling experience.

Places to stay near Tamoto Station